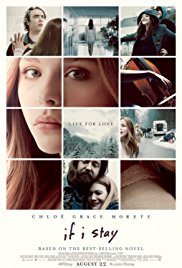 Genre: drama, teen
Budget: $11 million
Domestic Gross: $50 million [stats]
Director: R.J. Cutler Plot: Life changes in an instant for young Mia Hall after a car accident puts her in a coma. During an out-of-body experience, she must decide whether to wake up and live a life far different than she had imagined. The choice is hers if she can go on. Starring: Chloe Grace Moretz, Mireille Enos, Jamie Blackley, Joshua Leonard.
Users: 67% imdb 61% tomatoes
Critics: 36% tomatoes 46% metacritic