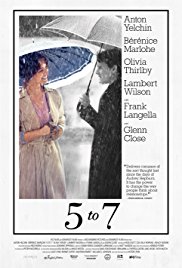 Gross: $163k (US)
An aspiring novelist enters into a relationship with a woman, though there's just one catch: She's married, and the couple can only meet between the hours of 5 and 7 each evening.Directed by Victor Levin. The movie stars Anton Yelchin, Berenice Marlohe, David Remnick, David Shannon.
Users: 71% imdb 70% tomatoes
Critics: 69% tomatoes 52% metacritic