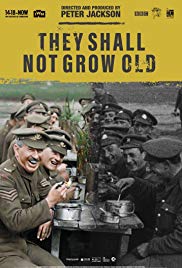 Gross: $18 million (US)
A documentary about World War I with never-before-seen footage to commemorate the centennial of the end of the war.Directed by Peter Jackson. The movie stars N/A.
Users: 83% imdb 91% tomatoes
Critics: 100% tomatoes 91% metacritic

They Shall Not Grow Old is a 2018, documentary, history, war movie