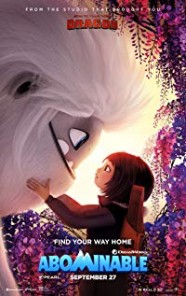 Budget: $75 million
Gross: $61 million (US)
When teenage Yi encounters a young Yeti on the roof of her apartment building in Shanghai, she and her mischievous friends, Jin and Peng embark on an epic quest to reunite the magical creature with his family at the highest point on Earth.Directed by Jill Culton. The movie stars the voices of Chloe Bennet, Albert Tsai and Tenzing Norgay Trainor.
Users: 70% imdb 95% tomatoes
Critics: 81% tomatoes 61% metacritic

Abominable is a 2019, animation movie