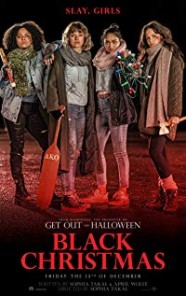 Budget: $5 million
Gross: $10 million (US)
Hawthorne College is quieting down for the holidays. One by one, sorority girls on campus are being killed by a stalker. But the killer is about to discover that this generation's women aren't willing to become hapless victims as they fight back.Directed by Sophia Takal. The movie stars Imogen Poots, Lily Donoghue, Aleyse Shannon and Brittany O'Grady.
Users: 32% imdb 31% tomatoes
Critics: 38% tomatoes 49% metacritic

Black Christmas is a 2019, horror movie