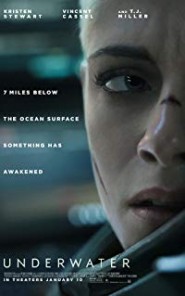 Budget: $80 million
Gross: $17 million (US)
Disaster strikes more than six miles below the ocean surface when water crashes through the walls of a drilling station. Led by their captain, the survivors realize that their only hope is to walk across the sea floor to reach the main part of the facility.Directed by William Eubank. The movie stars Kristen Stewart, Vincent Cassel and T.J. Miller.
Users: 61% imdb 60% tomatoes
Critics: 46% tomatoes 48% metacritic