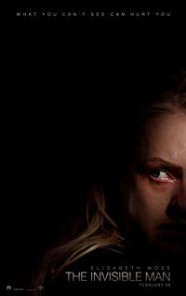 Gross: $n/a (US)
When Cecilia's abusive ex takes his own life and leaves her his fortune, she suspects his death was a hoax. As a series of coincidences turn lethal, Cecilia works to prove that she is being hunted by someone nobody can see.Directed by Leigh Whannell. The movie stars Elisabeth Moss, Oliver Jackson-Cohen, Aldis Hodge, Storm Reid and Harriet Dyer.
Users: --% imdb --% tomatoes
Critics: 89% tomatoes 64% metacritic